The 36th annual Toronto International Film Festival (TIFF) opened yesterday, so my life for the next 10 days is gone. I have some time today and a bit later in the week where I gave myself a break, (theoretically to write. Ha!), but I’m seeing at least 33 films at this point.

Yesterday, the TIFF was all about U2, with the premiere of the documentary From the Sky Down, but alas, not for me.

That was a “premium” screening, so I couldn’t select it with my 30 film pass and frankly I think that film is likely one of the main reasons it was next to impossible to get through on the web or the phone to get single tickets when they went on sale last Saturday.

But, I did have a good first night.

My first film was also a documentary, Into the Abyss by Werner Herzog. He got a (very long) standing ovation when he came on stage just to introduce the film, which shows how well he’s respected. Interestingly, there was no standing ovation at the end. I did like the film — actually, like might not be the right word. It’s a hard film to “like”. If you want to see an “easier” Herzog film that’s playing around still I think, go see Cave of Forgotten Dreams. Mesmerizing. 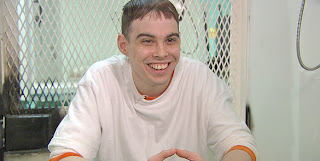 The subject of Into the Abyss is a very young man who was executed in Texas last year for murders he committed when he was only 18. It’s hard to like anyone in this film, and Herzog to his credit does not try to manipulate the audience opinions. Clearly Herzog himself is anti-death penalty, but he doesn’t ask leading questions or try to tug at heart strings and gives the daughter and sister of two of the victims a lot of time on screen. And while I didn’t like her, either… she’s one of the most sympathetic people he interviews. Herzog also dedicated the film to her and all victims of violent crime.

The part of this film that will stay for me for a long time is the realization that this laughing, goofy, immature, uneducated, probably lower-than-average IQ kid we saw interviewed is now dead. Killed by lethal injection 8 days after the interview. And there’s no question he was guilty of the crimes. But he was a human being and I suppose more than anything the film showed that he was human, not a monster. Herzog said that after: his crimes were monstrous. He wasn’t.

It’s probably clear by now that I’m against the death penalty, too and I try to keep this blog away from political or controversial issues, so I’ll shut up now and talk about the next film.

I also saw the new Gus Van Sant film Restless last night. I’m slightly on the fence about this one, too. It’s a more commercial film than a lot of his movies about teens, but I almost found it too commercial or too pat. I might have been influenced by a negative review I read in NOW magazine right before the movie started, but I think my beefs were slightly different than the reviewer’s. 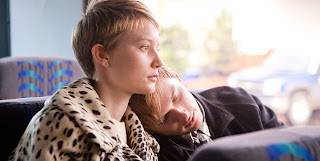 The film stars the fabulous Mia Wasikowska which is why I picked it. She really is such a fabulous young actress and she’s very good in this. The male lead is the screen debut of Henry Hopper, who happens to be Dennis Hopper’s son and for me, he was slightly less than fabulous. I don’t know. I had trouble believing a few things he did/said. But generally the performances are very good and it had a very natural, voyeuristic feel. 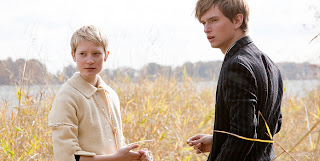 My issue was the screenplay which I thought was a tad unsubtle. I don’t know. As I try to describe it, it all sounds kind of clever and tight… And this is (slightly) spoilerish… A boy trying to get over the deaths of his parents imagines that he’s friends with a dead WWII kamikazi pilot and falls in love with a terminally ill girl.


The non-cliche, best part of the story is that it’s a really sweet romance. It’s clear these two kids are made for each other in a way you rarely see in films. You rarely see two characters who so completely get each other and it’s tragic watching them fall in love when you know it will end so soon.  I don’t know. Maybe I liked it more on reflection.

I did wonder as I was watching, “How did the screenwriter get this made? It doesn’t seem all that special. And how did he possibly get Gus Van Sant to direct?” Then it all became clear in the Q&A. The screenwriter is a long-time friend of Bryce Dallas Howard… Who produced the film, with the help of her father (Ron Howard) and father’s best friend (Brian Grazer). Hmmm.. That’s an idea if I want a screenplay made. I need to make friends with the kids of huge Hollywood producers. Must get on that.

But to the writer’s credit… I did really believe the relationship between these kids and that can’t have been just the actors and the director.

Here are some snaps taken last night.  The dude in the green pants is the writer and just look how pregnant Bryce Dallas Howard is! I had no idea 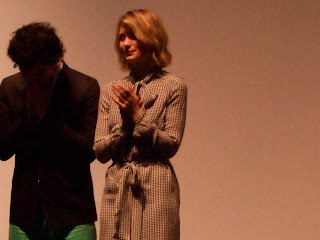 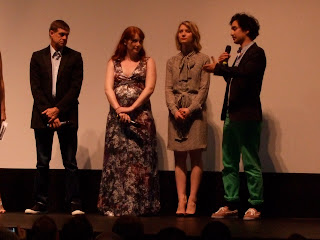 2 comments for “And it Begins”