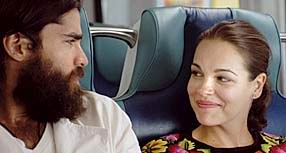 An American independent film, Bella, won the people’s choice award at the festival and I actually saw it.

I wouldn’t have put it on my top ten at the festival list, though… Not that I didn’t enjoy it… it just didn’t seem like anything that special to me. I had to look at the listing to remind myself what it had been about.

Now that I’m remembering it… it was probably a good lesson in slowly revealing backstory. For you writers out there, it’s probably a good one to see when it’s released for that reason alone. Nice redemption story, too… But I saw the ending coming a mile away and I think it was the ending that swept so many people up and caused them to vote for it…

For those of you who don’t know… Toronto doesn’t have an official prize like many big festivals. Rather, the public get ballots at each screening and can rate a movie on a scale of 1-5. (Actually, this process has changed just about every year I’ve been to the festival, but the idea that the audience picks has always been there.)

It’s a strange voting system… because you’re asked to vote right after seeing a film and I don’t know how you can know on the first day whether you’ll like the films you just saw better than the films you’re going to see. Also, some people may see only one film at the festival, others, like me, see nearly 50. But even 50 doesn’t make a dent in the 350 or so films screening… I suppose it’s really a contest of how many audience members the film inspires to actually fill out a ballot — which is, in fact, a test of something.

Suspect system or not, good films tend to win this category each year, (Tsotsi, Hotel Rwanda, Rabbit Proof Fence, The Whale Rider all won in previous years. (If memory serves… I couldn’t find a list online,) so I guess there’s something to the system. One of the reasons film producers like to premiere their films at the Toronto festival is because the audiences are real movie goers for the most part, not just industry people and press.