Dang, I am a bad blogger. I promised I’d get around to talking about some of the other TIFF films I saw last weekend. My how time flies.

While I haven’t found time to blog in the past 10 days, I did manage to see three movies 😉 . All films that were at TIFF, but I didn’t pick to see there (mostly because I knew they were coming out right after the festival.) I think all three of the fest movies I saw post-fest were great: Drive, 50/50 and Moneyball. If I had to pick a favorite, I’d have to go with 50/50, (because it’s the easiest to “like”), but if I had to pick the one I thought was “best” I’d go with Drive.

But back to The Ides of March. 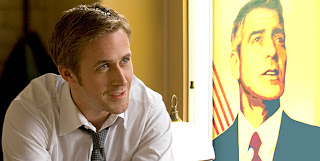 This is a political film starring George Clooney and Ryan Gosling (sounds great, right?) and co-starring Paul Giamatti and Phillip Seymour Hoffman and Marisa Tomei and Evan Rachel Wood (sounds even better, right?). I mean stellar cast, stellar performances, interesting topic… It should have been a home run (to use a metaphor more suited to Moneyball).

But it wasn’t home run for me. Don’t get me wrong, it was very good. But I wanted to be blown away and I wasn’t. I keep trying to put my finger on why…. I think it’s because there’s really nothing new or groundbreaking about this story. Call me cynical but it’s not news to me that otherwise good people with strong values and ideals can do unethical and immoral things in pursuit of power. And in this case in order to get the democratic nomination for the US Presidency.

I feel as if Primary Colors already covered that ground and while this movie is more serious and dare-I-say smarter than Primary Colors, I’m not sure it was as entertaining.

I’m not saying don’t go see it — especially if you’re a fan of either Clooney or Gosling — but don’t get your hopes up as high as mine were, because super-high expectations are hard to live up to.

Drive and 50/50, on the other hand, both lived up to my expectations. But I’ll talk about those soon.

I promise this time.