Probably not godliness, but who cares?

I was inspired by a great article by Margaret Wente in Saturday’s Globe & Mail. Inspired because she’s a great columnist, sure. But also inspired by the positive boost to my self-esteem. (But obviously not inspired enough to think of an original idea of my own for this blog… My apologies, Ms. Wente.)

Confession: I am a messy person. (Stop laughing, Molly.) I always have been. Although I know where things are when I want them, generally, I live in what looks to organized people, as a state of chaos.

If you’re one of those hyper-organized people, brace yourself. I’m about to post a photo of my desk. Well, part of my desk. 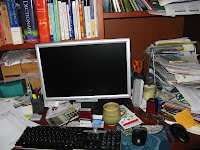 Are you still breathing?

I’ve heard some of the theories put forward in Ms. Wente’s column before. That actually being too tidy, too organized is a huge waste of time and merely a procrastination technique for people so inclined. I’ve also taken solace in the idea that many creative and brilliant minds of the past were very messy/outwardly disorganized people. Albert Einstein said if a cluttered desk is an indication of a cluttered mind, what does an empty desk indictate. (Roughly paraphrased quote.)

On this I rest my case.

Did my proclivity for a cluttered desk help my image/reputation in the business world? (Can’t. Stop. Laughing…)

But now I’m my own boss. It’s working for me. Mostly. So I’m not about to change and am trying, really hard, not to beat myself up for it.

What about you? Messy or neatnik?

9 comments for “Messiness is next to…?”