I went to see The Black Dahlia last night and I really, really wanted to like this movie. I’m a big Brian de Palma fan, generally, even when he makes it hard to be one.

I had just about completely lost interest in all the subplots and connections and over-the-top-for-no-good-reason characters in The Black Dahlia, when who do I see strangling Aaron Eckhart? Winslow Leach! Okay, not Winslow Leach,

but the actor, William Finley, who played Winslow Leach in one of my all time favourite movies (but which oddly never seems to make my top ten lists when I make them) Brian de Palma’s campy 1974 classic THE PHANTOM OF THE PARADISE.

If you’ve never seen this movie, why not??? YOU MUST.

To explain my obsession with this movie, I need to fill you in on a little personal back-story. In 1974 I was twelve (which makes me 29, now, right?) and living in Winnipeg, Manitoba. Both of these facts are important. For some bizarre reason I’m sure would be worthy of a Phd thesis, Winnipeg went NUTS for this movie. I don’t know the exact statistic, but I think it sold more tickets per capita in Winnipeg than anywhere else in the world. Like double or triple. It was such a phenomenon, that Paul Williams, 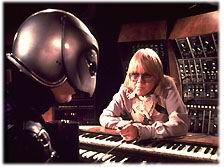 who stared and wrote the score opened his world tour in Winnipeg. He was pretty big at the time after writing all those Carpenters hits and had a few hit records of his own accord. (Rainy Days and Mondays, springs to mind.) I only saw The Phantom of the Paradise in theatres twice (I wasn’t technicaly old enough to even get in once) but had friends who saw it upwards of 15-20 times. This, I guess, is where the twelve-years-old detail comes in. My friends and I all actually thought Paul Williams was pretty hot. Maybe it was the idea of a man who was our height? Or his pretty long blond hair? His munchkinesque face?

Anyway, I love this movie. I loved the music. I knew (still know, sadly) every lyric to every song. (Must buy the soundtrack to test this assertion, but I’m pretty confident.)

And in case you think I’m making this whole Winnipeg connection up, or blowing it out of proportion, the third hit when I googled the movie title today brought up this link to something called Phantompalooza held just this year in Winnipeg. Looks like all the major cast members attended. Too funny.

Has anyone else seen this movie? Or am I alone in my crazy obsession.

4 comments for “Phantom of the Black Dahlia”