Okay, so I really fell down on blogging about the films I saw last week and there are still so many amazing ones I haven’t mentioned. In all, I saw 40 films (I think). I had 44 tickets and think I passed on going to 4. (My pass was good for up to 50, but I think that’s physically impossible. Not if you want more than 3 hours of sleep a night, anyway.)

So, the French ones…

I didn’t realize I’d picked so many French films, but they were all worth seeing and three out of the five I’d highly recommend.

First is Persepolis, which I think will be released in North America in English, not French, so you won’t even have to deal with subtitles. 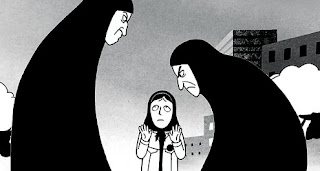 As you can see from the photo, it’s animated (and mostly hand drawn from what I understand) and I thoroughly enjoyed it. It’s based on the autobiographical graphic novels of Marjane Satrapi, formerly of Iran, who now lives in Paris. The TIFF guide referred to this film as a, “…darkly humorous take on her experiences as a spirited young Muslim woman coming of age in Tehran – during the rule of the Shah, the Islamic Revolution and the gruelling Iran-Iraq War…”

Sure, there are some very dark elements. Sure, there are elements of “history lesson” in this film, but what an amazing way to present history, through the point of view of a young girl growing up and experiencing the history first hand. For me, one of the most important aspects of this film is how it breaks down stereotypes of Iranians and Muslims and shows how, in many ways, kids are kids no matter where they are. Okay, so I don’t remember having one-up arguments with friends over whose relatives had been tortured the longest… but all kids have arguments like that using whatever amunition (parent’s job or talents) is relevant to them. The bullying scenes were pretty scary, too — kids chasing other kids with nails poking out between the fingers of a fist. But again, in context, it showed how kids are affected by what’s happening around them and act out their stress via games.
And the film wasn’t all bleak. Not by a long shot. There were some truly laugh out loud moments… For example, I’m remembering two perpectives of a past boyfriend — one told when she was in love and one after their break up. So clever. So funny. And also the scenes of her coming out of a depression made me laugh out loud. I admire any writer/artist who can pull on the audience’s emotions like that, making us feel empathy for her depression and then to pull us out of that sadness with a hilarious take I don’t want to spoil, but it involved the theme from Rocky. Anyway, imdb.com lists some American actors, (including Sean Penn and Iggy Pop!), in the “English version” so I assume when it’s released over here, Persepolis won’t be a French film and because of the animation, I don’t think it’ll matter one bit. (I hate dubbed films normally, but I mean, all animated films are dubbed, so what’s the difference? Especially this kind of animation. I guess it would matter for some of the Pixar stuff where the characters’ mouths actually move well to the words … but not in this one.)

And the best French film I saw this year… Probably one of my top 5 or so films of this year’s festival full stop, was Le Scaphandre et Le Papillon. 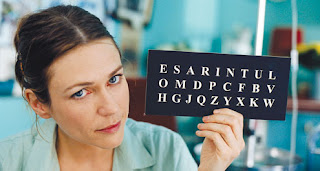 Translated, The Diving Bell and the Butterfly. A truly amazing film. It’s based on a book written by a man with “locked in syndrome”. He suffered a stroke which left everything paralyzed except one eyelid, but his brain, in terms of thinking etc was completely in tact. The filmmaker did an amazing job of putting the audience in this man’s shoes, which was at once heartbreaking and uplifting. A speech pathologist devised a way to communicate with him –basically she read out letters (in the order shown in the photo) and he’d blink when she hit the right letter, and then she’d start again. Believe it or not, that’s how he wrote the book. You have to see it to believe it. And I don’t want to give you the impression this is a tear-jerker smaltzy kind of movie. Not at all. HIGHLY recommend this film if it comes to your city. It wasn’t one of my original picks but I swapped it for something else and was glad for it. One small detail… the subtitles got very confusing for anyone who knows any French, when he was learning to “speak”, because, for example, when he was trying to spell mourir, which means “to die”, he’d blink on M and she’d ask “M?” and the subtitle would read D. Until I trained myself to listen instead of reading the subtitles in those bits, it was very distracting. But go see this film if you get the chance.

The other French film I really enjoyed was Les Chansons D’Amour. 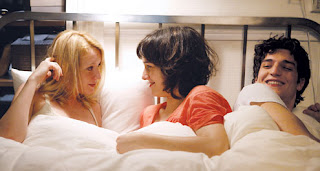 I did talk about this one a bit the day I saw it. Basically, it was interesting and quirky fun. A musical about some very unconventional characters and their love lives.


Chrysalis was a French sci fi film I liked well enough, but don’t think it was amazing enough to recommend that highly. The same with La fille coupee en deux, which I blogged about when I saw it. Interestingly, it starred the same actress as Les Chansons, and while La Fille is certainly considered the “bigger” film of the two… based on the filmmaker etc. I really enjoyed Les Chansons, better…

So, that’s it for the French films. Tomorrow… The ones about child abuse including Alan Ball’s new film Nothing is Private and Nicole Kidman’s new film Margot at the Wedding. Brace yourselves.

2 comments for “The French Films”