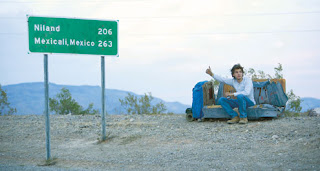 Okay, so I just had my first truly transcendent festival experience of 2007. I don’t think I’ve felt that way in a movie theatre since the World Premiere of Paul Haggis’ Crash a few festivals ago.

I thought today was going to be all about Cronenberg for me, and I did like his film… But WOWOWOWOWOW…

Into the Wild, the new Sean Penn movie staring Emile Hirsch and with music by Eddie Vedder. Can’t express how moving and riveting this film was. And I was really tired going in. I actually considered going home after my 6:00 pm film, but I’m so glad I didn’t. Worth staying up for.

For me, the truly amazing films at the festival are the ones where there’s no buzz, were there’s been no reviews, because no one has freakin’ seen it yet. That’s the way it was with Crash in 2004 and Into the Wild this year. Those of us lucky enough to be in the room are the first people to ever see it on a big screen. And when a film like that is good… well it’s amazing.

Into the Wild is so beautiful visually, the music’s incredible, the performances are real, the characters fascinating, the story gripping in spite of what many people would consider a slow pace, and then Jon Krakauer’s truly beautiful and deeply meaningful prose as read by Jenna Malone. WOW.

I have three Oscar predictions, no four. Best Actor, Emile Hirsch, Best Score, Eddie Vedder, Best Director, Sean Penn, Best Movie, Into the Wild. That is, assuming this movie hits theatres before the end of the year. I have no idea what they’re planning. [Update: According to IMDB.com, it’s out this month. Go see it.] With Crash, they waited almost a year after I saw it to release the film to theatres… But that was because Haggis was getting all that buzz over Million Dollar Baby. (I assume–and digress.) There are also a few possible supporting actor noms including Hal Holbrook and Catherine Keener who were stand outs for me in a cast where every performance felt so real.

If you don’t know anything about this book, then I suggest not reading it or listening to any reviews before seeing the movie. If you have read the book, I expect you won’t be disappointed. I may be wrong about my Oscar predictions, but if this film doesn’t solidify Sean Penn’s reputation as a stellar filmmaker, I don’t know what it would take. Truly fabulous. Okay, I’m gushing. But the film really blew me away, and if the standing ovation was any judge, it blew everyone else away, too.

And the festival audiences don’t do that for every film just to kiss up to the stars in the room. Last night, there was short polite applause after The Assassination of Jesse James, in spite of half of Hollywood royalty being in the room. (Okay, just the boys. Half the cast of Ocean’s Eleven, Twelve, etc. were there to watch Brad in his arty western.) Which I enjoyed, by the way, I know I didn’t blog about it last night… But I did find it beautiful both visually, and in terms of the words. (Like this film tonight, Jesse James has a voice over narration at times, and it was like poetry. Beautiful.) But in spite of Pitt winning best actor at the Venice Festival, I really don’t think that film’s going to do very well. (Nor did I think he was all that great in it.) It was about the same length and overall pace as Into the Wild, but felt about 2 hours longer… And I talked to several people today who genuinely hated it…

Anyway… Another big day tomorrow, starting out with a very interesting sounding movie, In Bloom, starring Uma Thurman, (which sounds controversial enough that it may not hit theatres in spite of Ms. Thurman), and ending with Paul Haggis’s new film, In the Valley of Elah, in the evening… But Haggis’s new film has already been seen by the press and in Venice, so not nearly as exciting. BTW. Haggis was in the theatre tonight to watch Sean Penn’s movie.

4 comments for “All about Sean Penn”