Check out this Japanese promo spot for Glee. Makes me smile.

That’s all I have to say.

Oh, and that Tobey Maguire was amazing in Brothers. If you didn’t see this film when it was out for about a week… rent it for his amazing performance alone. Stunning. Thanks Golden Globes for reminding me about a great film.

Finally, Molly’s blogging about my stress over at Drunk Writer Talk, I guess because I’m too stressed to do it myself. 😉

Blogging with my fellow drunk writers today about stuff I liked in 2009.

Stop by for a chance to win a copy of THE MAMMOTH BOOK OF TIME TRAVEL ROMANCE, and if you’re really lucky, a $100 gift card!

I saw the first episode of Vampire Diaries when it aired back in the fall and kind of went, “M’eh.”

Didn’t hate it, but didn’t like it enough to set my already way too busy DVR. But this week, while not much else was on, Much Music, up here in Canada has been showing back to back episodes all week and boy, have I got sucked in. (Pun intended.)

What I hadn’t realized before was that Kevin Williamson was the writer. I didn’t watch Dawson’s Creek the first time around, either, but did catch a bunch of them in syndication and totally got the appeal of that show. Witty repartee and teen angst. What’s not to love?

Not to mention Boone from Lost. Yowza. I know it’s a little sick, but that Boone loves his sister subplot from the first season of Lost was one of my favourite subplots, although it might have had more to do with his eyes and the way he looked at her than the actual writing.

But regardless, it’s great to see that actor on TV again and in such a great role. I totally feel like a cougar. A cougar who wants the hot bad-boy vampire. Wow. Sick. 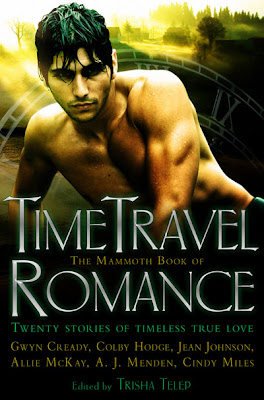 So suddenly, all I’m blogging about is firsts. To be more accurate, I suppose, I haven’t been blogging much at all lately, but that’s mostly because of another first, my first real deadline that’s looming over me like an overhanging cliff in an earthquake. Don’t stand under the huge chunk of shaking rock, idiot! LOL

But today is the official release date of the anthology my short story, “Lost and Found” is in. Not quite the same as a debut novel, but it is the first time my fiction has been in print — well, unless you count high school yearbooks and the like. And my yearbook didn’t have such a hot guy on the cover.

Although it’s officially available today, Amazon and other online booksellers have been shipping this book for more than a week now. In fact, it seems like they’re running low on stock because the ship by date has stretched out. But still time to get it by Christmas. 20 authors for the price of, well, less than 20. 😉

Can’t wait to actually see a copy in a bookstore. Will be heading down to my local store this week to hound them into shelving it, if they still have it in the stockroom, or ordering it, if they haven’t. They have stocked the previous “Mammoth” romance anthos, so I’m hoping they stock this one, too. If not, I’ll beg and plead and promise to send people to the store to buy it.

If anyone out there sees this anthology on a shelf, let me know. Better yet, take a snap. Very exciting. And if you’d like a chance to win your very own copy, I’m also blogging on the 2007 Bond Girls blog today and giving away a book!

Okay, so I’ve been sitting on this news for a while now, waiting for various details to be hammered out. Sitting on it so long, in fact, that this announcement feels almost anticlimactic. But, really, how can there be anything anticlimactic about announcing MY FIRST BOOK DEAL.

Yes, I have been offered a two book deal! Someone is actually paying me to write! Someone is making a bet that readers will put down their hard earned cash to buy something I wrote! Wow. (Something more than a short story, that is. To read my first published short story, order here. 😉 Already shipping from Amazon in the US. Just saying….)

The offer was made based on a proposal

and it’s for two YA novels, (young teen, really), a genre I’ve been flirting with for a long time, but had yet to tackle beyond the ideas stage.

The books will be released in Fall 2010 (yes, that soon **Maureen is writing very quickly**) by Phoenix Books, a Beverly Hills based publisher better known for celebrity non-fiction and audio books than for kids fiction. (But hey, they did publish Carl Reiner‘s children’s picture book.)

And I’m super excited they chose my series to help launch them into this segment of the publishing world. (Not that they don’t know the teen/tween market… One of their current titles is “I Heart Robert Pattinson“.

The books are the first two in a planned series based on fairy tales, but with a few twists — including a “make your own adventure” element where the reader gets to choose what the characters do next.

The first two books are:

CINDERELLA: NINJA WARRIOR, wherein Cinderella is not that interested in going to a ball, and uses her martial arts and magic skills to defeat her evil stepmother and win the heart of the prince.

SLEEPING BEAUTY: VAMPIRE SLAYER, wherein a princess is cursed to sleep during the day, and everyone else in her kingdom is cursed to sleep at night — when the vampires attack. How’s a girl to find true love and break a curse when all the non-bloodsucking-type boys are asleep?

We’re already talking about books 3 and 4 and I’m excited about those ideas too, and the ones I have percolating for books 5 and 6 and… I’m getting away from myself.

I’ve always loved the magic, wonder and happy endings offered by fairy tales, but even as a kid was bothered by all the passive heroines in peril, waiting for their princes to save the day. I’m thrilled to be re-imagining these much-loved stories with tons of girl power, lots of action and danger, and yes, handsome, charming princes, too. But in my fairy tale world it’ll take more than good looks for the heroines to win a happily-ever-after ending.

And I’m hoping these books will mark a happy beginning for me. After several other projects came so close to making it to the ball, but never quite got there, I feel a bit like Cinderella myself right now. Gotta run, pumpkin carriage outside… 😉

Okay, so I’ve been sorely neglecting this blog of late, but today I’m blogging on both Drunk Writer Talk, (about Mad Men), and on Nobody Writes It Better, (about Remembrance Day).

About to embark on a rapid writing marathon a la Nano. (Okay, I have signed up for NaNoWriMo, but can’t be an official “winner” because I’m already 4K into the book, and hope to be at least 15K in before the end of October and the official NaNo start. But definitely plan to get at LEAST 50K done in November, too.

If you’re on NaNo, be my buddy. I’m on there as mmcgowan.

I’m blogging about the great agent hunt over on DWT today. Who is rejecting whom?

I had fun with it. Check it out.