This news has already been disseminated on some (most?) of my writers’ loops and on Twitter and Facebook but for some bizarre reason I failed to blog about it.

I really have become a slacker blogger. I will get back to it. I will.

But for now…. For those of you who haven’t heard…

I signed a three book deal with Amazon Publishing! (Imprint and details to be revealed at a later date.) And for those of you who don’t read the publishing press… Yes, Amazon is now a publisher. And no, this isn’t anything to do with their self-publishing. And yes, the books will be in both print and e-book form.

The deal is for a YA trilogy, that can best be described as a sci-fi thriller. Think Divergent (although that book didn’t come out until after I wrote mine, so I definitely wasn’t thinking Divergent… but if you liked Divergent, I think you’ll like my new trilogy.)

Book one is called Deviant and will likely be released in the early fall of 2012. Books two and three are tentatively titled Shredder and Chosen.

The trilogy is set in a post-apocalyptic world and the heroine is a 16 year old girl who can kill with her eyes.

Here are a couple of tweets by my fabulous agent, Charlie Olsen, sent the day I could finally spill the beans. (I had to sit on the news for MONTHS.)

Too bad he can’t give me a cover quote! 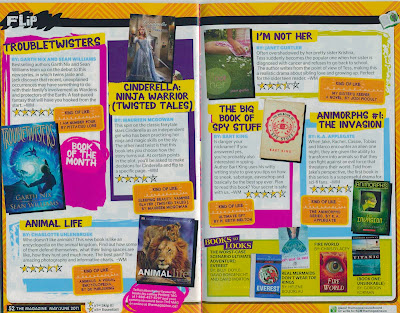 I’m guest blogging today at Cindy Procter-King‘s blog about my bumpy adventures on the road to publication.

Also, I hope to be doing some posts about the film festival, soon. So far have seen two great ones and about 10 “okay” ones. More later.