Okay, so I’m realy tired so this is going to be quick…

Started the day disappointed… Went to the screening of Kenneth Branaugh’s THE MAGIC FLUTE (the surreal) hoping to see Ken… figuring he’d be there since it was a World Premiere… Only to find out it was a being screened in Toronto 25 minutes before it was being screened in Venice and Ken decided to go to Venice. Venice instead of Toronto? WHAT was he thinking?

Anyway… movie is clever, but very strange and if you’re not an opera buff, don’t bother.

Next was the gut wrenching THE WIND THAT SHAKES THE BARLEY. Ken Loach’s film that won the Palm D’Or in Cannes this year. Pretty powerful film with obvious parallels to politics today… Who’s a guerilla organization, who’s an elected government, who’s a freedom fighter. Bits hard to watch (torture, that kind of thing) but well worth seeing. Here’s the very talented Cillian Murphy doing the Q&A after the film. 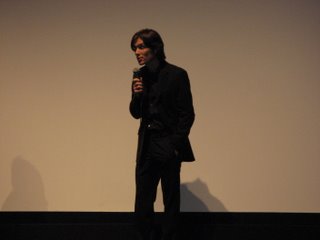 After that, I saw a hilarious new film called FIDO. Every year, I usually go to a couple of Canadian films hoping to see the one that’s actually going to do well at the box office. Well, this year, FIDO might be it. Part zombie movie, part Lassie, 100% satire, I thought it was hilarious. 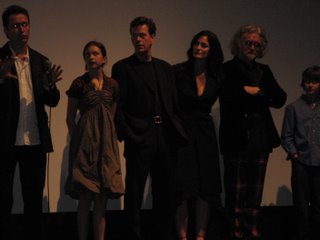 Here’s the filmmaker who I’m too tired to look up his name (maybe I fix it after I sleep… along with some of the cast including Dylan Baker, Carrie Ann Moss and Billy Connelly.

Then it got even more ridiculous. I had a much sought after ticket to the midnight screening and world premiere (I think) of Borat: Cultural Learnings of America for Make Benefit of Glorious Nation of Kazakhstan. (That’s the Title, folks.) Already it as a crazy screening. He arrived on a donkey (didn’t witness this, just heard) and no one would take their seats because they were all watching for Borat (Sasha Cohen) to come into the theatre. There were several minor Canadian celebs I noticed in the audience… George Strombolopolous (has a show here and very briefly hosted “THE ONE” in the US before it got cancelled — not George’s fault, I’m sure), Ben Mulroney (host of Canadian Idol and son of former Prime Minister of the same last name), Paul Gross (starred in Due South and currently Sling and Arrows — also a very funny film about curling. Seriously about curling and funny… well maybe only funny if you’re Canadian… well maybe only funny if your parents both used to curl), Robert Lantos (producer of such films as Sunshine).

Anyway… They finally brought Borat up on stage, introduced the film and started it… By this time it was at least 12:30 am. I didn’t check my watch. Now, one interesting thing about these midnight screenings is how many people show up drunk. I almost got loaded just smelling the breath of the guy behind me… And I guy across the aisle and one row back was smoking a hash pipe. (Why he didn’t get caught is beyond me. Not so much for the dope, but for the smoking indoors, thing…) So, with that kind of crowd, you can imagine how excited everyone was when about 20 minutes in, the projector broke!!!!

Yes… Interesting… Well, Borat did a minute or so of impromptu stand up while standing on his seat in the theatre and shouting… It almost made us think — for an instant — that the projector dying was part of the act….
The poor volunteers told us it would be “one minute” every five minutes for about for about fifteen minutes… Then some audience member started to do some pathetic psychic act from his seat… Then finally, Michael Moore (who I hadn’t noticed was in the theatre until then) and Larry Charles (of Seinfeld fame and the producer of the Borat film) took the stage and opened the floor to questions, which ranged from serious ones about how they got people to sign wavers to appear in the film to really silly ones. One kid asked Larry Charles if he’d give him a note to be late for school the next day. He did.

Wish I could remember something else… cause a lot of it was funny. Oh, Michael Moore going on about how Canada is going to hell in a handbasket now we have a conservative government was funny with Ben Mulroney sitting right there… Wish I’d had the guts to point it out to Michael. Then, after MM and LC had been on stage at least 20 minutes… Borat got up and did a fairly staged but funny Q&A with one of the TIFF programmers, until they finally announced about 1:45 that the screening was cancelled, but they’d show it tomorrow at midnight at the Elgin… Sigh. Not sure I can do a midnight screening two nights in a row. Especially because I’ve now spent 45 minutes doing this (which is why you’re not getting pictures of Borat–may post some tomorrow) and it’s 3:15 am. Crap.

I don’t have a film until noon tomorrow… But that still means leaving the house by 10:30 am or so (7 hours from now) if I want a half decent seat…

On another film fest note… When I opened my browser, I couldn’t help but notice a link to Orlando Bloom promoting the film HAVEN on the Today Show.

It reminded me of why I love the festival; why it’s all worth while. Although I expect all of the films I saw today will open soon, I saw HAVEN at the 2004 festival. Yes, not 2005 — 2004. I saw that film — which is great, by the way — TWO YEARS AGO and it’s just getting released into theatres now.

1 comment for “Day One — From the Surreal to the Ridiculous”