The passes for the Toronto International Film Fest go on sale in a couple of days which means… da, da, da, dum…. Maureen must make a decision about whether to fest or not this year.

I must say, the TIFF is amazing… Such a huge variety of films from the very obscure to the very strange to the Oscar contenders. Last year, I saw the North American premiere of BROKEBACK MOUNTAIN and CAPOTE and THE HISTORY OF VIOLENCE among many others…

And as much as I just love seeing great films — lots of great films, I saw 45 in 11 days last year — I have to admit I like a little star-gazing, too… 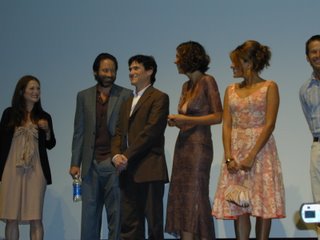 Like this night at the World Premiere of Bart Freundlich’s TRUST THE MAN, a film I really loved… But maybe it was just the wild atmosphere in the room? There’s something about seeing a movie seated a couple of rows in front of the actors who are in it, and their significant others and siblings (in Maggie Gyllenhaal’s case — see photo below). Seriously though… I thought this movie was great — who know Billy Crudup could be funny? Okay, I guess he was funny in ALMOST FAMOUS, but sexy funny, not goofy funny like he was in this film.

Has anyone seen this in theatres yet? I saw a trailer a few months ago here in Toronto, but if it ever opened, I didn’t notice… But some of the posts on IMDb make it sound like it’s opened in the States? Anyone know? 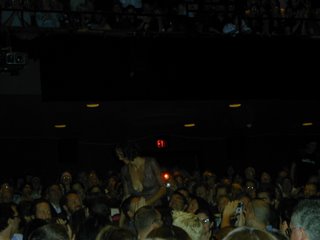 Here’s a pic of Maggie Gyllenhaal’s boob when she got up to be introduced at the start of the film. You can see her boyfriend Peter Sarsgaard (who should be my boyfriend) beside her, and yes, that’s her brother Jake’s eye over to the right and you can make out David Duchovny to Maggie’s right. Claire Danes was there to support Billy too… How sweet. (Like to bump her off, too. LOVE Billy…)She was in town because SHOP GIRL screened at last year’s fest, too… and she was also at the 2004 Festival because STAGE BEAUTY premiered at that fest (the one where she met my man Billy…)

Well, I digress… but while I ponder my decision over the next few days, expect this blog to be heavily weighted with film fest trivia and decision angst… Some more pictures, too! (I didn’t take that many… Note to self, must get a better camera if I go again this year…)