So the latest cheesy reality show snagged me tonight. (Because I could care less about American football. Don’t even know who was playing and wasn’t that excited to see Prince in the half-time show.)

In this new show, six potential Danny’s and six potential Sandy’s are competing for the roles in a new Broadway production of Grease.

The producers have given “cute” names to each of the contestants to help we, the viewers, remember them, and my least favourite of the bunch has been dubbed “Hot Danny”.

He’s slick, I’ll give him that, but he’s arrogantly overconfident about his chances of winning. Hot? (Okay, in the shirtless shot they showed of him in his previous career as a model he does have great abs…) But his hair!!! Yuck. And his dance moves and the way he looks at the camera make me think Gay-Bar-Go-Go-Dancer Danny, not Hot Danny. (Actually, his hair doesn’t look as bad in this photo as it does on stage. It totally overwhelms him. He’s got this tiny face and Texas-Beauty-Queen hair.

Okay, this post is super mean. But am I wrong? Anyone else watch? 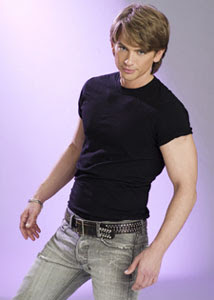