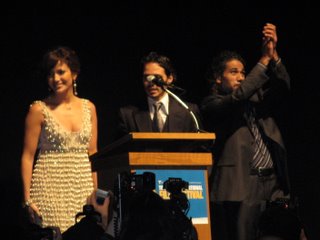 So, I like to tell people I go to the festival for the “filims” and I have to say, it’s at least 80% about the movies for me…

But tonight I confess, it was 100% about celebrity. And what a lesson in relative celebrity it was.

Yes, there are “stars” at most TIFF screenings, complete with limos and red carpets and press and quasi-body-guard-volunteers to “block”. A few actors I saw earlier in the week — Britney Murphy for one — also had real bodyguards with them. But with all that, most of the stars still act and behave like real people. Not Jennifer Lopez.

Tonight was the world premiere of El Cantante, staring J Lo and her hubby. I’ve never seen a set up like they had for her… One lane for most of one busy block of Yonge street (a very main drag in Toronto) was shut off. Even the sidewalk for 50 or so yards each side of the theatre was blocked off… (Normally the stars get out of their limo right beside the line… so depending on your timing, you might see them get out of the car, or watch them talk to the press or have a chance to say hello or whatever. Not J Lo. They had the entire area cordoned off. (I don’t know if this is her “fault” per se or whether the size of her celebrity means this is necessary. But boy… no one else attending the TIFF seemed to need this. (That said, Brad Pitt didn’t come to the screening of Babel I saw… But I did hear he shook hands and talked to people at the first screening, so I don’t think even el Pitt got the star treatment Jennifer did. Hey, I’ve seen Bono show up for a screening and just sit in the audience with everyone else (Breakfast on Pluto last year) and Dustin Hoffman (Borat this year), and Ethan Hawke (something last year, can’t remember)… etc, etc.)

Anyway… huge spectacle for J Lo and spectacle-seeking, I admit, is kinda why I picked that film.

Sadly, I didn’t like the movie… (First film this year I didn’t like at all. Okay, maybe the second.) The music is good/fun, but basically I don’t think this guy, Hector Lavoe, had an interesting enough life to warrant a bio pic. I mean… “poor boy from Puerto Rico gets famous, does too many drugs and dies of AIDS.” Nothing really fresh or interesting or revealing in a tale like that. And neither he nor his wife were sympathetic characters in the least–not as portrayed by Jennifer and Marc, anyway. (Now, I know this unsympathetic character complaint flies in the face of my rant… I have no problem with unsympathetic characters as long as they learn something or change or are at least interesting! These two didn’t and weren’t.
Two not-nice-people who led depressing lives. Why make a movie about them? I expect it’s 100% because Marc Anthony was a fan and his wife can get people to do anything she wants.

Oh, and the Idi Amin film THE LAST KING OF SCOTLAND was a amazing. Best film I’ve seen this year. I’ll blog about it some time soon.