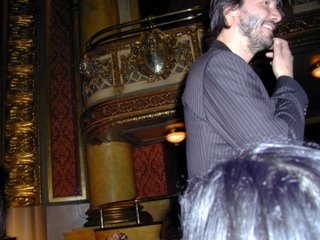 I snapped this pic at the premiere of Thumbsucker at the TIFF last September. Sadly, my camera has quite a delay between pressing the button and the snap, or it would have been a great picture. I was sitting on the aisle; he walked right by me.

So, I need a new camera. Maybe not for Keanu Reeves per se, but in case I get a great opportunity like that with someone else snap-worthy. Not to mention my niece and nephew and my dog-nephew, none of whom are very good at keeping still.

On Keanu, though… He was exceptionally cute in person. I was kinda surprised. I guess I’ve been an on-again-mostly-off-again fan of his. He sucked so badly in Much Ado About Nothing a gazillion years ago, that I thought I’d never forgive him, (or Kenneth Branagh for casting him) but every once and a while, he’s pretty good.

Thumbsucker, directed by Mike Mills, is a movie not many people have seen. I think the DVD is out now, so if you’re into indie films and would like to see a very fresh take on a coming of age movie, I highly recommend it. Keanu has a small supporting role that’s very funny and pokes fun at his real life persona as well as his Matrix role. He plays a dentist who doles out more therapy and new age babble than any real therapist would. He’s like a spiritual guide for the protagonist. Hey, doesn’t everyone go to their dentist for therapy?

Anyhoo… The plot of the movie revolves around Justin played by Lou Pucci, a 17 year old teen who still sucks his thumb and his attempts to stop and the affects that has on his life. In a sub-plot, his mother, played by the fabulously talented Tilda Swinton, considers an affair with a TV celebrity, played by Benjamin Bratt, who’s being treated at the drug rehab clinic she works in. Justin’s father, played by the enigmatic Vincent D’Onofrio lives in the past, pining after a career in football he might have had.

In the end, the son (in spite of his thumbsucking) shows the most maturity and to me, the film is about accepting who you are and explores whether treatments for some so-called problems are worse than the problems themselves. Great satirical bit on Ritalin in this movie.

“Adapted from Walter Kim’s novel, Thumbsucker boasts sharply written dialogue and eccentric humour that dissects the foibles of this idiosyncratic bunch. The young actors’ freshly expressive performances are perfectly balanced with the sublimely understated work of the film’s established stars. The sterile backdrop of suburban repression receives refreshing treatment in this tale of learning to take one’s medicine and reckon with reality.”

So, a round about way to say I’m buying a new camera today. Okay, not for Keanu photo ops but conference photo ops.

3 comments for “Keanu Reeves – Reason to get a new camera?”