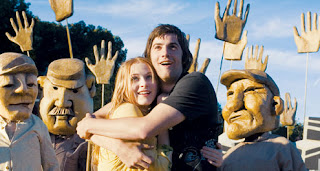 Okay, so yesterday I theorized that whichever film I was most looking forward to in any particular day would be sure to disappoint… Not today.

I saw Across the Universe this morning and as excited as I was to see it, the film exceeded my expectations in just about every way.

It’s kind of hard to explain this movie. To call it a musical trivializes it, but clearly it is a musical. The director Julie Taymor did a Q&A after the screening and according to her there’s only 30 minutes of dialogue in this 2 hour movie and that sounds about right. It was mostly music. But the music is so compelling and fun (or heart wrenching) and the visuals so original it didn’t feel long.

And surprisingly, in spite of featuring such well known songs, the music felt original, too. I was blown away. Sure, it was 33 Beatles songs all strung together to make a story… But all of the arrangements are different and the performances outstanding and the lyrics felt totally organic to the story being told. I’m telling you, the guy who plays Jude, Jim Sturgess, was truly amazing. Not only is he adorable, he has an incredible singing voice and, like all the performers in this movie, has the acting talent to make it seem like Lennon & McCartney’s lyrics were about him and that he was singing them for the first time. According to Julie Taymor, about 90% of the musical performances that ended up in the movie were from live performances on the set (not prerecorded and lip synced). Sounds like they did prerecord everything, but had the actors sing on set, too (with the music playing in little ear buds in their ears) and those were the performances she went with most of the time. Evan Rachel Woods was amazing, too. I knew she was a talented young actress, but who knew she could sing, too?

LOVED this movie. (Can you tell?) I feel like it’s one I’ll enjoy watching over and over again. It opens in select cities including Toronto this Friday (everywhere on Sept 21) but I’m glad I saw it first and saw it in the beautiful Elgin theatre and got to hear Julie Taymor answer audience questions at the end. FANTASTIC.

Heard something else interesting today. Not sure if it’s accurate, but heard it from someone who has a short film in the festival, who heard it at one of the industry events. Anyway… the gossip was that the cut of the Brad Pitt film (Jesse James) I saw the other night is not the one that will be shown in theatres starting in ten days. The rumor was that Brad Pitt did his own cut of the movie, but both the director and the studio thought it was too long and slow-paced. Supposedly, I saw the Brad cut and the one being released into theatres is the shorter one the studio liked… This is probably a good thing. It was very long 2 hours and 40 minutes and felt it…

I know I didn’t talk about The Assassination of Jesse James by the Coward Robert Ford the day I saw it… It’s been percolating. Overall, I liked it, but certainly didn’t love it. If you’re interested in films and creative storytelling then you might enjoy it. Visually, it was pretty spectacular. Some art worthy shots to be sure. Also, the director did a few interesting stylistic things. For example, during the voice-over narration, he made the screen look like an old daguerreotype or something…. That is, a circle in the centre of the screen was in focus, but the edges were blurred… Like it had been shot through an old fashioned lens. Things like that did make it kind of interesting… And the shots of characters posing… certainly the movie was from the POV of looking back at a legend from today, not watching it unfold in real time. I think that’s what made the pacing drag, but also was kind of creative, I guess. But the film did drag at times and a few story elements weren’t clear to me… But this may just be because I’d let my mind wander.

Given the tepid applause at the end of the film (even with the ridiculously star-sprinkled audience) I wasn’t the only one who was luke-warm on Jesse James. I’ll be interested to see how it does in release. (Remind me some time to talk more about that night. Really surreal.)

I’m still trying to decide what I thought of In the Valley of Elah, that I saw yesterday, too… During the film, I was really disappointed. It felt preachy and heavy handed in it’s message and derivative of TV cop shows in it’s delivery… But by the end I liked it more, and now that it’s percolated for a day, I realize there were some really strong moments… Mostly at the end… And I’ve also decided that in many ways Haggis did deliver his overall message (that war turns boys into monsters) in a fairly creative way… At least not in the most predictable way. But this movie didn’t 100% work for me. At least it didn’t live up to my very high expectations.

Another 5 film day tomorrow. I have a ticket to the new Woody Allen film… but may take a pass. Right now, my day goes like this:

So, if I can get a ticket for something at Scotia that ends no later than 2:00…. I might do that instead. (or I might sleep in and skip Bill… but it doesn’t have a release date listed anywhere, so this might be the only chance to see it and it sounds pretty interesting…)

6 comments for “Living up to the hype”