One of my WIP’s that’s more of a WFIP (formerly in progress) is/was a series of interconnected stories about single people. And I was planning to have the audacity to to suggest that some of my characters were very happy about their marital/relationship status. I have nothing against marriage or other forms of domestic partnerships and I’m sure many people are extremely happy in their marriages. But what irks me is the assumption that many/most married people have that people who are not married are defacto unhappy or missing something in their lives. That they’d be happier if only they were married. This assumption really offends me and that’s the theme I was hoping to bring out in my book. That happiness comes in all kinds of packages. It’s not one-size-fits-all kind of thing. And without turning this in to a way-too-personal post when it was supposed to be a movie review… I’m not anti relationship. If the right man came along. Sure. But I so love the freedom I have now to do whatever I want whenever I want.

Now, my book never got off the ground for a variety of reasons… I may still write it some day… but watching the film Married Life made me think about it again, because it made me a little bit happier about my single status. 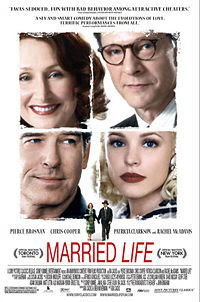 The Globe and Mail reviewer, Kamal Al-Solaylee suggested in his review that the film Married Life poses two questions. One: can you build your happiness on the unhappiness of others; and two: can attempted murder spice up a marriage.

All I can say to that second question is, “HUH?” Did we see the same film? Just shows how different two people’s perceptions of the same film can be. I’m really curious to know if Mr. Al-Solaylee is married and my guess would be yes. And that his marriage needs some serious spicing up. For me, the second very obvious question asked in the film was: Can you ever really know what’s going on in the heart and mind of the person sleeping next to you.

In fact, that question was not just implied, it was specifically asked. And to me, that’s what the film was about. It was a pretty depressing take on marriage if you ask me. Now, not to get too biased the other way, at the end of the film all the characters seemed outwardly happy. Like I said before, happiness comes in all kinds of packages. But by the end of the film there were a lot of secrets never shared between all the couples. Big secrets (including an attempted murder) brushed under the rug, never to be discussed in order to save relationships.
d
Hmmm… Now that I think of it, perhaps it wasn’t meant to be an entirely negative look at marriage, merely a realistic one but brought to an extreme to make a point.

Interesting film, anyway. Not amazing. Didn’t entirely work for me, I think mostly because of the Chris Cooper character. I normally love him in just about anything… but I found his character’s motivations too much of a stretch to be believable in this story. But obviously the film got me thinking.

I’d recommend it as a rental, unless if you suspect (or know) there’s a big secret between you and your significant other. Warning. Watching this film together might bring secrets to the surface, and this film certainly suggests that some things are best left buried.