A couple of great films I saw at the film festival last September opened this weekend (in Canada, anyway, I think they opened across North America). I meant to post a blog about them last week, but somehow the week got away from me. These were actually two of the very first films I saw at the festival last year, so my brain wasn’t even fried yet when I saw them. (so I trust my judgment more…)

Think of this movie as Far from Heaven meets Night of the Living Dead meets Lassie. Yes, Lassie. The references to Lassie were one of the funniest things about this movie for me.
Not only is it really funny, it’s kind of subversive, too. Although it’s set in the 1950’s, or some kind of parallel universe version of the 1950’s, I think it has a lot to say about our current culture of fear/paranoia. Also lots to be gleaned about cruelty and slavery and prejudice and intimacy and love. (On the topic of slavery… Amazing Grace opens soon. Do not miss this film.)
The night I saw FIDO I thought FINALLY. Finally a Canadian film that might actually have some commercial success (other than Porky’s, which is frankly more than a bit embarassing, even if it has one of Kim Catrall’s first on screen appearances.) FIDO was also screened at Sundance last month, so I hope it catches on in the States.
Here’s a photo from the premiere (after Billy Connolly stole the mic from the director and pretty much started doing his stand up routine… I guess he doesn’t get to talk in the film, so thought he was entitled… I’m kicking myself for not taking notes that night… Because one of the questions Billy was asked was how did he end up in this film… and the answer was great, because another actor was originally cast and dropped out. But I can’t for the life of me remember who… But it was a big name… Robin Williams or Steve Martin or someone like that. Whoever it was, Billy was perfect. Amazing how much emotion he could get across without speaking, covered in blue/black makeup and with blood and flesh in his teeth on occasion. 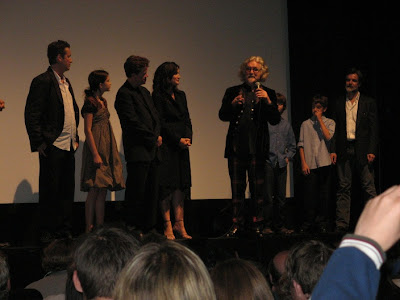 Anyway. Really enjoyed this film. May go see it again now it’s in theatres. Hope it does well, but I expect it won’t have the distribution to show on enough screens in the US to make a big impact. Fingers crossed.
The other movie I saw, I think the same night at the festival, that opened this weekend is The Wind That Shakes the Barley. WOW. This is a British film, set in Ireland, and won the Palmes D’Or in Cannes this year. I read an article in the paper this weekend that said this film actually didn’t do very well when it screened in it’s native Britain, and didn’t get on that many screens. A pity. I suppose no country likes to look at films that cast a negative light on its past actions. And the IRA is perhaps still too touchy and current a subject to have a film focus a sympathetic eye on early members of a terrorist organization that was still causing terror so recently in the UK.
But this film is worth seeing for so many reasons. First a warning. The violence is very hard to watch. It’s the hardest kind to watch in my opinion, because it’s so real and so brutal and so relatable… Can violence be relatable? Maybe personal or intimate? Can’t find the word I want… (I’ll think of it a half hour after posting this.) That said, I don’t object to this kind of violence in films. I just hate films that are full of violence for violence’s sake.
I found the history in this film very interesting. Sure, I know a little about the Irish fight for independence, and of course the IRA and some of the terrible things they did, but I didn’t really know about the Irish civil war that happened in the 1920’s after an initial truce was signed with the British that many Republicans thought compromised too much.
But aside from all the history and politics… it’s really a story of two brothers and how circumstances and evolving ideals tear them apart. Tragic story.
The heavy Irish accents are a bit difficult at times… But the performances are astounding not only from great actors like Cillian Murphy, but also from some of the minor characters some of whom had never acted before. I’ve read that the director, Ken Loach, never lets the actors see the script until just before shooting and he films as much in sequence as possible, so the actors can’t let knowledge of what’s going to happen to their characters later in the film, affect their performance in the current scene. Interesting. Whatever he does, he gets amazingly real performances from actors and knows how to tell a compelling story. 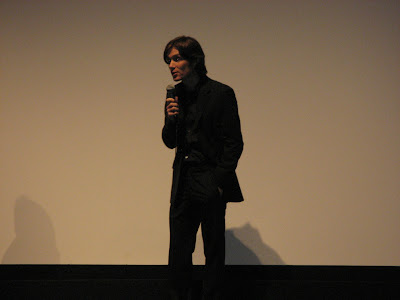 Here’s a photo of Cillian Murphy at the Toronto (North American) premiere last fall. I saw him on that same stage a year earlier for Breakfast at Pluto, which I also enjoyed, but couldn’t have been a different character. Very interesting actor, Mr. Murphy is…

Even his more commercial work like Batman Returns and Red Eye were interesting. Certainly someone to watch. And those eyes… (Red eye issues in this photo don’t do them justice.)
Anyone else seen either of these? Seen anything else worth seeing lately?

7 comments for “Movies opening in March”