Am I getting tired or was today just OK?

I ended up sleeping through Bill my 9:00 am screening. Oh, well. I hope it gets released into theatres. I started the day with what was supposed to be my second film of the day, the new Woody Allen film, Cassandra’s Dream starring Ewan McGregor and Colin Farrell. It was good. Not like the most amazing film I’ve ever seen–not even the most amazing Woody Allen movie, but better than many of his more recent films, for me anyway. 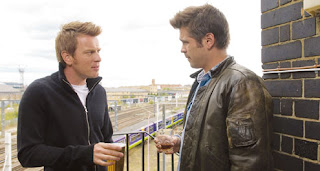 With Matchpoint and this film, it seems Woody Allen’s back to exploring ethical and moral dilemmas like he did in great movies like Crimes and Misdemeanors. (Makes me wonder what kind of ethical lines Allen has crossed in his life — other than sleeping with his adopted daughter, that is.) Ewan and Colin play brothers in the film and it was interesting to see Farrell in the “beta” brother role. I think this film comes out around Christmas and it’s worth seeing. (I mean, is any movie with Ewan McGregor not worth seeing???)

After that, instead of trekking 10 blocks to another theatre, I passed on Weirdsville which I’m a little bummed about, because it looks fun, (but I assume it will be released in theatres in Canada, anyway) and picked up a ticket for Atonement. I’m glad I did. I guess the Woody Allen movie got me thinking about ethics and morals and since I’d read Atonement I was kind of in the mood for more of that kind of thing. 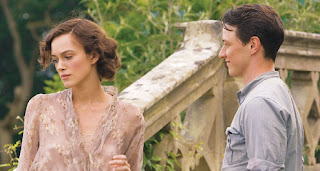 Anyway… As afraid as I was about being disappointed, I actually think this movie worked for the most part. The book is so amazing… If you haven’t read it, you should. But it’s a challenging book to adapt for the screen in that it goes over the same time period and events more than once from different points of view, and in that all is not what it seems for most of the story. I wasn’t sure how the filmmaker would pull this off… But he did use a few tricks to give the viewer clues, including some interesting foreshadowing devices that you’d probably only notice if you know the book… but added to the enjoyment for me. The coolest example of this was using a typewriter as a percussion instrument throughout bits of the musical score. If you’ve read the book, you may get why this was an interesting choice.

Atonement was made by the same filmmaker who did the most recent Pride and Prejudice, which I loved. He really is an expert in show don’t tell… He shows so much in all these tiny little moments.. Like having James McAvoy touch the surface of the water Keira Knightly has recently been in… That kind of detail reminded me of his P&P which also had many nice little moments like that.

After that, I saw La Fille coupee en deux, which Barrie asked me to review. Dang. Sorry Barrie. I dozed off a couple of times. I don’t think it’s a boring film… I was just tired — maybe too tired for subtitles. I kept jerking awake when the audience laughed. It’s pretty out there… A very implausible story in my mind, but I don’t necessarily think it was supposed to be plausible. But the filmmaker is some famous french director who was part of the new wave thing and he’s in his eighties now and I can’t help but think that it’s a story only a man that age would tell. I probably need to let it percolate a bit… and maybe see it again to see just how often my eyes were closed… But I’m not sure that I like what this film says about women. The main actress Ludivine Sagnier was in another absolutely charming French film I saw this week, called Les Chansons d’Amour. I’m planning an “about the musicals” post at some point, and so I’ll wait on talking about Chansons until then… But some of you may have also seen Ludivine in Swimming Pool. She was the young girl in that film.

I ended the day with an Australian film called Romulus, My Father, starring Eric Bana and Franka Potente. Eric was there (jealous much, Sinead?) A very nice little film. Not amazing, but very nice. I found one plot element a bit off, but then learned during the Q&A that the film is based on a memoir… so just goes to prove that sometimes real life isn’t very believable.

Three more days, but things already feel like things are winding down… I still have 14 or so movies to see… But at this point I can’t even remember if there’s anything I’m really excited about. Oh, I don’t have a ticket, but I’m going to try to switch one of my picks tomorrow to see Le Scaphandre et le papillon. (The Diving Bell and the Butterfly.) At least two people have called it their favourite film when I’ve asked. It’s showing again tomorrow afternoon when I now have a ticket for a film called The Take, that looks okay… but the French film sounds better. It’s actually been a good year for French films for me… Maybe I’ll do an “about the French films” post later, too…