Last night, I went with my brother and some of his friends to a concert by The Musical Box. Never heard of them? Well, neither had I.

Turns out they’re a Genesis cover band that not only cover Genesis songs… but actually reenact actual concerts–down to the costumes, sets, movements, on stage banter, even (if you believe my brother) the in-the-dark-pre-first-song tuning noises. 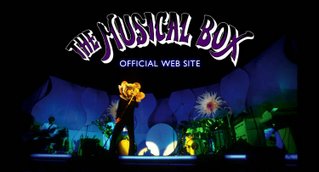 I have to say, the concert was pretty cool, if a little bizarre. Bizarre that so many people are so seriously into the early days of Genesis that they’d want to see these concerts reenacted. Bizarre than many of these people (including my brother) were too young to have ever seen these concerts when they actually happened. (Early 70’s)

Me? I didn’t discover Genesis until the Duke album… Way past the era being reenacted by The Musical Box. Watching the concert I couldn’t help wonder why, if I had as a 10 year old, discovered bands like Yes, (and Rick Wakeman) and Jethro Tull etc. Why not Genesis? (I realized the “cool” bands from the early 70’s I did know about were all introduced to me by older cousins or siblings of friends. I guess none of them were into Genesis.)

It also made me slightly nostalgic for the much maligned decade of the 70’s. As much bad music came out of that decade, it was also kind of a renaissance period for rock music where exremely talented often classically trained musicians (above bands, plus Frank Zappa come to mind) were exploring the limits of the new electric/electronic instruments–pushing them further than “rock and roll” ever had, creating symphonic-style concerts and albums, rather than a bunch of hit songs.

Now, I’m no sort of music historian so I’m probably talking out of my ass here… but the concert did make me nostalgic for a time when FM radio was avante guard, for a time when not all music had to have hooks or get radio play to be appreciated, for a time when when black lights and strobes were the “coolest things ever!”

Would I have sought out this concert on my own? No way. Did I enjoy the experience? You bet. 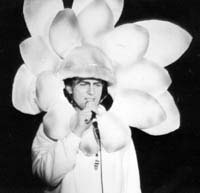 4 comments for “Recreating Moments in Time”