SCBWI is the Society of Children’s Books Writers and Illustrators. Try saying that three times fast. Or three times slowly for that matter. 😉

I’ve been to quite a few writers’ conferences over the years, but this was my first SCBWI, and I had a fabulous and productive time.

I nearly filled a whole notebook with madly scribbled notes. The full day “intensive” on Marketing for Professional Writers was unbelievably overwhelming. My head was ready to explode by lunch. And that day ended with drinks with my agent and the impressive and witty Jon Fine from Amazon Publishing. Now it’s time to sit back and prioritize.

For now, here are some of the fun highlights — just the ones for which I have photographic evidence. 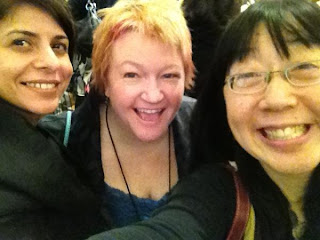 Photo taken by Debbie (on the right), also known as @inkyelbows

All of the speakers at this conference were unbelievably high quality, but one fun unscheduled treat was a short presentation by Henry Winkler who writes middle grade novels with SCBWI founder Lin Oliver.

Here’s bad and fuzzy photo I obnoxiously took of him when I accidentally ended up standing beside him waiting for the elevator. I should have said hello and asked permission, but didn’t want to pass up on the opportunity. My apologies to Henry. 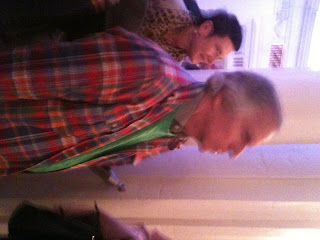 After the conference, I did a little chill-axing at the MOMA before taking the train to Newark airport for my flight home. Didn’t have nearly as much time there as I would have liked, but stopped for the best cup of hot chocolate I’ve ever had. 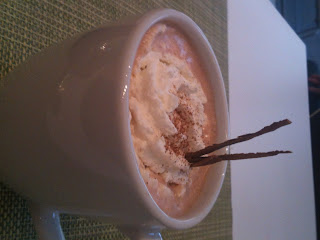 What you can’t tell from this photo, was that it was hot in two ways… and spiked. I can’t remember all the ingredients but the key ones (beyond hot chocolate) were tequila, chilli flakes and cinnamon. Yum. That’s a stick of cinnamon sticking out. Talk about spicy. Burned going down, in many good ways.

I will talk more about the content of the conference both here and at Drunk Writer Talk soon.