After promising to post some reviews, I guess I should follow through. I’ve hit that evil just past the middle place in my current WIP and I’ve been spending a lot of time banging my head against the keyboard and haven’t felt much like blogging.

But here’s my take on a couple of films that are out or will be out soon.

I actually already talked about this one here.  According to imdb.com it was released in the US on September 16th. I don’t think it’s showing up here in Canada.

I give this a “maybe worth a rental” rating. I love Mia Wasikowska–think she’s incredibly talented–but the screenplay didn’t live up to her performance for me. 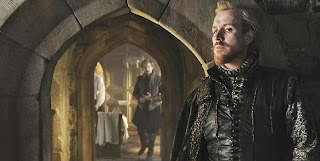 This was the one “second choice” I got this year. I’d chosen A Dangerous Method (which doesn’t open until December) but wasn’t that disappointed to get this screening instead. Both screenings were “day after the gala” showings so it’s not like there was any red carpet action going on anyway.

This one releases Oct 28th, and if you haven’t already seen the trailer (they’ve been showing it for MONTHS already) it’s set in Elizabethan times (not QE2) and posits another theory for who actually wrote Shakespeare’s plays, plus some interesting theories about the rightful heir to Elizabeth’s throne.

At least this theory was a new one to me, although I certainly don’t pretend to be all that informed about Shakespeare theories. I was definitely aware of the theories that Will could not have been the true author, since there’s no historical evidence he was educated, never mind being able to write. The Shakespeare character in this movie (a minor role) was very funny and I enjoyed him a lot. I also like the young Earl of Oxford, played by Jamie Campbell Bower, who plays Arthur in the TV series Camelot. But I’m not certain I really bought Rhys Ifans (photo above) as his older self. I didn’t immeditately recognize Ifans, so I don’t think I was affected by other goofier parts he’s played, but I just didn’t buy him as a leading man. I honestly thought he was the villain in the first few scenes he was in and it took me a while to figure out who was who and what was going on. My overall reaction might have been different if I’d seen him differently from the start. (One reason to see again is to see if the screenwriter or actor or director missed an opportunity to make me like/identify with the protagonist…) I think the problem is that they make you think that Ben Jonson is the main character, but he’s really not….

Talking about Ifans not really working for me and my issues with identifying a main character probably leads me to my overall reaction to this movie which is:  I’m not sure… I think I’m going to see it again when it comes out. My biggest problem had nothing to do with the movie (I don’t think) but to do with the couple who were sharing my row near the front right side of the Elgin and destroying my concentration. Both of them had their phones out through the movie, frequently flashing in my eyes, in spite of my telling them to shut up and turn off their phones a number of times. People have suggested I should have called an usher (or one of the big burly men with night vision glasses) but I figured that would just cause more disruption for other people, and I’m not sure if the the big burly men care about phones shining in people’s eyes as long as you’re not filming…. Generally festival goers are better behaved than this pair, but it was a weekend screening and I don’t think they were true “festival goers” if you know what I mean. 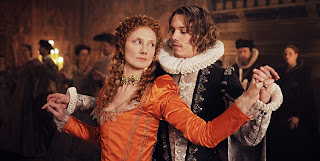 Anyway, it was brilliant to cast mother/daughter acting team of Vanessa Redgrave and Joely Richardson as the younger and older versions of Queen Elizabeth I and the obvious age difference between Richardson and Bower (who plays the young version of Oxford) made one major plot twist even more deliciously creepy.

I think this one is worth seeing on the big screen–it’s beautiful if nothing else. Full of interesting conspiracy theories about an fascinating historical time. And like I said, I plan to see it a second time. But it didn’t blow me away as much as I’d hoped.

Will post my review of The Ides of March some time over the weekend.

So, I’m a little too bagged to blog properly… I will get caught up and talk about this year’s films properly, but I did have a really great day today. It was a five ticket day. I can’t say five film day, because one of them was a “Maverick” talk, not a film, but we did see a film clip as part of it…

My day started with Rampart, starring Woody Harrelson. I will post more about this film… Overall: great performances, interesting, too long. At least that’s what I think was “wrong” with it for me.

Then I went to a talk between Indian-born, Canadian filmmaker, Deepa Mehta and Salman Rushdie. She is currently making a movie of his book Midnight’s Children that will be out in October 2012. It was a pretty cool talk. I haven’t read the book, but the talk made me really want to see the movie and tackle the book, too. Sounds like my cup of tea… No pun intended. Seriously. I did not intend that almost pun.

Then I saw a screening of Anonymous. Very good. I think I’ll see this movie again when it comes out (soon). I was distracted by very annoying people sitting next to me who when they weren’t talking to each other, one or the other of them had their phone out. That kind of behaviour is rare at TIFF and I wanted to kill them. But LOVED the film’s theory on Shakespeare. Loved it.

Then came Pariah, which I understand was one of the darlings of Sundance last winter. And often those films don’t do as well with a “real” audience vs. the industry audience at Sundance, but I loved it. I’ll talk about this one later, too… But I was riveted. Touching coming of age story at its core. Stunning performance by the lead.

Then my last film of the day was Martha Marcy May Marlene. VERY interesting and tense. Loved it. Again, a stunning performance by the young lead (who happens to have very famous older twin sisters… named Olsen…) A non-hollywood ending that will make some people crazy (a few people swore aloud) and had me sitting stunned through the credits while the theatre cleared out. I have a new theory about the ending… Now can’t wait for someone else to see it so I can discuss.

Sorry for the very vague references and incomplete reviews. I promise I will talk more about these films and post some pictures as soon as I get some sleep!