I hereby vow **holds hand up** that I will blog at least once a week, more often if I can, until I’ve covered more of my TIFF films.

One I really liked:  Martha Marcy May Marlene. (It’s easier to remember the title and order of the names after seeing the film…)

This is not an “easy” film but I was completely enthralled and mostly because of the performance by its lead, Elizabeth Olsen, pictured here with Sarah Paulson who’s always interesting to watch. 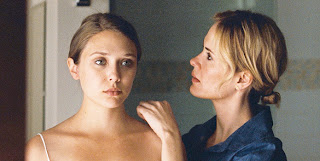 I didn’t know until after seeing the film that the actress was the younger sister of the Olsen twins and I’m glad I didn’t know, because I might have been distracted thinking about it. But maybe not. She was pretty remarkable in a not very easy part. Time will tell whether or not her performance in her debut movie was fluke but I’m guessing not.

The real challenge of this part is that she has to play this young woman in several different states of mind. One is a lost teen searching for approval and a place in the world. One is a happy, eager new member of a cult, thinking she’s finally found acceptance and love. One an obedient soldier in the cult, broken but steadfast. One a desperate escapee on the run. And finally a girl trying to adapt to the real world again and figuring out how to live with her sister and brother in law.

The timelines interweave. If memory serves (this is the problem with blogging more than 2 months later) we first see the escapee version of her character, then the girl trying to cope, then we flash back to when she first met the cult members etc. The tension continues to build as we see more and more of what this girl went through and understand why she’s so messed up and acting in such a bizarre manner in the present.

The cult leader is played by John Hawkes from Deadwood and Winter’s Bone. He was also fabulous in this. When I was a teen everyone was talking about cults… Maybe because the idealism in the 1970’s and the disillusionment with “society” (remember antidisestablishmentarianism?) led more young people toward cults… But this film reminded me why being brainwashed haunted my twelve year old nightmares. 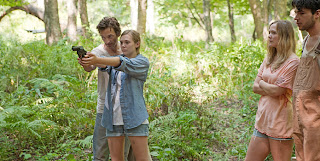 The ending of this movie will likely tick some viewers off. I saw it with a festival audience and even then a few people shouted at the screen at the very abrupt ending. But those people might not have been angry… more startled. That’s all I’m going to say, except that with hindsight it was the perfect ending. The only other way they could have gone would be to add a big third act climax with a Hollywood ending… (think the hilarious last act of Adaptation after Charlie Kaufman goes to Robert McKee’s Story seminar) but it’s just not that kind of film. And we’ve seen enough at that point to deduce what’s about to happen after the projector shuts off.

If you have any tolerance for “art films” this is one you should see. I think Elizabeth Olsen might end up nominated for some awards and might just be a new rising star who will make people think of Kate and Ashley as Elizabeth Olsen’s older sisters rather than the other way around.