Every December that beverage company we all know, which herein will remain nameless (because I’m a little afraid of them), starts airing those stupid commercials with penguins and polar bears. Makes me a little crazy.

Me. I think it does matter. (I also think it matters when words are spelled incorrectly, or poor grammar is used in materials targeted to children. But that’s another topic.) So many people get all their information from television these days, and if they see penguins and polar bears together enough, they start to think it must be true. Just look how the Flintstones influenced fundamentalist Christians. LOL.

Proof of my theory that these ads are evil? I just read today that, “A new science textbook for school claims that polar bears eat penguins…” This was reported by Graeme Paton, in British newspaper, The Daily Telegraph. Peter Cotgreave, the chairman of the Campaign for Science and Engineering, is quoted in the article as saying, “….It reflects a loss of respect for science.”

Yes, that’s true. But I also think it proves that it does matter what you show in ads and movies. How influenced the average person can be by misinformation. (Hey, great fascists and dictators understood this. They called it propaganda. Arguably the good people at Fox News understand it, too, but I serioulsly digress.) Obviously the writers and editors of this text book (TEXT BOOK!!!) were influenced enough by images like those ads (that beverage company isn’t the first offender, here) that they believed this was a fact.

Maybe (I hope) the people who created those ads knew the polar bear/penguin land they created was fanciful… but I fear far too many of the viewers who see it, including children, don’t understand the fanciful part.

(But I totally buy that there are polar bears on the island in LOST. 😉 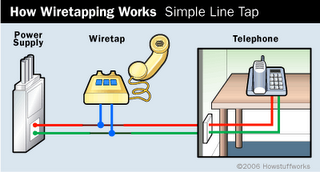 Okay, what possible reason could the US Secret Service have had for tapping Princess Diana’s telephone? Hoping to get some good gossip? Maybe hear some royal celebrity phone sex? Perhaps an overweight agent was hoping to get some weight loss tips (because those “anna” web sites for anorexics/bulimics didn’t exist yet)?

Seriously… I think they just tapped her phone because they were curious and they could. Makes you wonder if they often tap celebrities’ phones for fun.

If you could listen in on someone’s conversations and get away with it, whose would you listen to?

One of the good manners lessons my mother taught me as a very young child was to cover my mouth when I sneezed or coughed and NEVER to wipe my nose on my sleeve. Only people who grew up in barns do that, apparently.

Well, the City of Toronto is trying to get us all to move into barns, with their “Do the Sleeve Sneeze” campaign. I guess the idea is that if you cough or sneeze onto your hands and then touch stuff, like the hand railings in the subway or whatever, everyone who touches where you touched will pick up your germs.

Maybe this makes sense… But gross! I wonder if we’ll start to see lots of slimy looking coat sleeves this winter. I think I’d rather get the flu.

There are probably a billion people blogging about the whole JonBenet thing who know way more about it than me, (I’ve really only skimmed headlines and caught tiny bits of a few newscasts and articles) but I feel compelled to jot down a few thoughts anyway—mostly about the power of the press to implant an impression in the public’s mind. It sure did in mine…

Okay, I’m sure the prosecutors in Boulder were instrumental in helping the press create the impression that the Ramsey’s were guilty… But I didn’t follow the case closely enough to know whether the press was the cart or the horse when compared to the prosecutors and police.

I do think the Ramsey’s weren’t particularly great at making public impressions—especially the mother, who I’m sad to hear died before this scumbag confessed. The image she projected on TV didn’t help her. I saw clips of Barbara Walters’s interview with the Ramseys on the news last night and I have to say, even though I was watching these clips knowing someone else had confessed, it looked to me like she was hiding something when Bawbwa asked point blank if she’d done it. Everything about her expression, her posture, her disdain for the question screamed “guilty” to me—or at least that she was hiding something.

But who knows how you’d react in the face of not only having your daughter sexually abused and murdered, but also being accused of the horrible crime. I don’t think any one of us could know whether we’d make a sympathetic impression while suffering that kind of loss. It’s not hard to imagine shutting off every emotion and appearing cold. Maybe it was just her emotions I sensed her hiding…

The sad thing is that the press is so focused on selling papers or TV ads that they go for the most lurid angle, with little regard for the truth. They know how easy it is to create an impression in the public’s mind and frankly the Ramsey’s simply didn’t seem very sympathetic—so it probably didn’t weigh too heavily on the members of the press to play up the possibility that they’d done it.

In addition to the Mrs. Ramsey’s less than warm & fuzzy image… it was shockingly easy for me to dislike a woman who’d put her six-year-old child in sexy costumes and enough make-up and hairspray to make an adult look sleezy, and then have her prance around on a stage competing with other little girls to be the prettiest. I’m very, very opposed to child beauty pageants. I think they enforce the worst kinds of values in children and if she wanted her kid to compete in something that would help her self-esteem and build confidence, why not try a sport, or enroll her in ballet classes, or art classes, or horse riding, or anything not 100% focused on how cute she was. I know this is just my opinion, and the late Mrs. Ramsey was entitled to hers… but the whole pageant thing clouded my assessment of her character.

I confess. I am one of many people who thought until this week that Mrs. Ramsey probably did it—or at least knew who did. I’m sorry for that.

And here I am letting the press reports help me assume this guy’s guilty already. Only time and a proper investigation will tell whether this guy is really guilty or just has some sick fantasy of wishing he’d done it… I’m so glad I didn’t become a journalist. I don’t think I have the stomach for it. 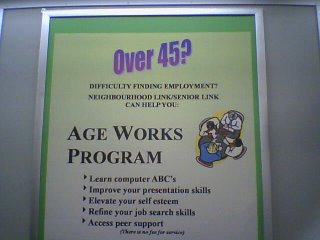 Okay, on the subway the other night, on the way home from the Emily Giffin book signing, I saw this ad for a government program to help unemployed people find work.
Good program, sounds like–usually these things are just for teens and young adults–but calling it a program for seniors??? Over 45 you’re a senior? Give me a break!

Okay, it says neighbourhood link/senior link. But just the word senior under the age 45 was enough to get my back up.

Maybe I’m just a little too close to that age, not to be taken aback by seeing that age group lumped in with seniors. I thought 40 was the new 30. Humph!