Oh, how I wanted to love this movie. And oh how it disappointed me.

I’ve been trying to put my finger on why and here are a few thoughts:

1) This is a movie that used 3D in the worst kind of way. I love how movies over the past few years (notably Hugo, Pina, Avatar) used 3D to put you in the scene with the characters (or with the dancers in the case of Pina). And how they used the technology to make the world seem more real. Awesome.
But this movie uses it to make things come out of the screen toward the audience. In that respect it reminded me of all the really bad 3D movies from the past. Or Joe Flaherty in a vampire costume moving his face toward the camera in old SCTV sketches.

Fast fwd to about the 2 minute mark to get the first example of what I’m talking about. These old sketches were hilarious. But long… Oh, 1970’s Canadian TV.
Back to Oz:  It felt as if the action sequences were planned with the central question being: How can we maximize the number of objects that shoot out into the audience’s faces? Rather than: How can we make this scene exciting and further the plot?

2) The film felt really juvenile. Now, I get that people probably want to take their kids to this movie. But really little kids will be terrified. Big, scary-toothed flying gorillas coming out at you from the screen… (And I thought there could be nothing scarier than flying monkeys…) And yet the tone and dialogue and character development felt like it was aimed at 5 year olds. Or 4 year olds. I’ve seen movies aimed at 5 year olds which entertained me more than this did… 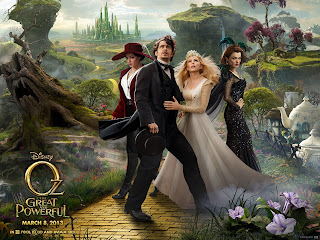 3) They had too many character arcs. I feel like the witches’ stories got badly short changed. I get that it was a story about how the wizard of Oz ended up in Oz… but they why try to tell the wicked witch creation story at the same time? It just didn’t work. Now that I’m typing this, I realize there have been tons of films where the writers successfully told both a hero and villain creation story in one (just about any comic book movie, for example) but this one did not succeed. Maybe because they spent too much time trying to be cute. Or giving us winks to things. Don’t know. But the transformation of the Mila Kunis character from good to evil seemed like an incredible wasted opportunity. And I’d have loved to know more about the Rachel Weisz character too. And the politics of the good vs wicked sides of the witch world… And why witches are in charge in Oz etc. etc. So many interesting things, unexplored.

4) I’ve decided James Franco can’t act. This might be heresy, but it’s how I feel at the moment. I remember seeing him in that James Dean biopic years ago and being blown away. And the critics and everyone from that point on seemed to take it as fact that he was the next coming… But looking back on his filmology, I think he’s annoyed me as many times as I’ve been impressed. It’s like squinting and talking through his teeth, which worked for Dean, is the main tool in his actor’s chest. Now… I did love him in 127 Hours… And I do admit that the Oscar hosting gig, when he acted like he was so above it all, might have turned me against him. But it does say something that I reached this, “Huh, Franco can’t act,” conclusion in the middle of watching Oz. I almost felt like he thought the entire movie was a big goof. Like I was watching Franco on SNL or something, doing a spoof on an Oz prequel, rather than watching him as a character in a movie.

5) Bad romance. Wow. I just thought of this while composing this post. But it was another big problem. First, they start to develop a romance with the Mila Kunis character. And we start to care about her and them. And see problems on the horizon for their relationship because clearly she’s more invested in him than he is in her (which fits his philandering character to this point). So those of us who like romance subplots are rubbing our hands together thinking, this could get interesting! And then we’re yanked out of that romance subplot. And another witch is tossed in his path. And for no reason other than they’re on the same side in a fight, and she looks like a girl he tossed aside back in Kansas, (and she’s blonde?) we’re supposed to believe he’s going to fall in love with her. And her with him. Insta-love. Does not work.

So, in spite of all the above, I actually didn’t HATE this movie. And I thought some things were really cool. (like the way they eventually create the Oz illusion.) But overall, I was disappointed.

Has anyone else seen it?