Very quick post… I skipped my 9:00 am movie (sob, it was VOLVER, which will be released in theatres in November, but still….) They rescreened the Borat movie last night… so I didn’t get home until well after 2:00 am again… 7:30 came way too early.

Need to run to make the next one.

Sad development. It appears the days of snapping pictures of movie stars prior to the screenings of TIFF movies are over. Perhaps during Q&A’s too? Not clear.

What ticks me off is that instead of making a general announcement, they hired security thugs (may not be the festival, may be the film distributors) to threaten people who pull their cameras out to snap a pic. 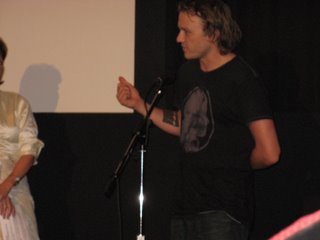 I snapped this photo of Heath Ledger (gorgeous in person) before CANDY — a quite depressing but well acted Australian film about drug addicts… I tell you. The ex-marine they sent over to beat me for this crime was not nice. I think my camera is officially retired.

I fully understand that they’re worried about piracy… But why didn’t they tell us somewhere… The program, the website, the letter they gave us when we bought our freakin’ expensive passes, that we could no longer take photos during the introductions or Q&A’s. And they seem to be so inconsistent about it… I must have taken 40 pictures the Borat night… Sigh.

PS. Saw my first AMAZING movie yesterday… But no time to tell you about it yet. Interestingly, also Australian (I guess yesterday was Oz-day for me). It’s called 2:37. More on it later.

2 comments for “The Last Picture Show?”