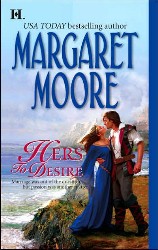 I’ve been remiss in posting interviews and am very happy today to post an interview with Margaret Moore. This interview was first published in the Toronto Romance Writers Newsletter Romantics in March, 2006.

Margaret has forty (forty!) published books and novellas under her belt, over six million copies in print and is a USA Today Bestseller. She has written for multiple houses, most recently HQN where she was one of the imprint’s launch authors.

Maureen McGowan: Thanks so much for taking the time to do this. When did you first know you wanted to write novels?
Margaret Moore: Not until I was home with my second baby, and even then, it was sort of, “Hey, this might be fun.” I didn’t want to go back to a “regular” job, my degree is in English literature, I have a vivid imagination, and my friend had recently given me THE WOLF AND THE DOVE, which I really enjoyed. I wasn’t somebody with a burning desire to write and be published. I had a burning desire to be an actress, actually, but—and this is hilarious in retrospect—the possibility of rejection made me decide I wouldn’t be happy in theater.

MMcG: Going into publishing to avoid rejection. That is funny! Tell us about your first sale. How many manuscripts had you written? Did you have an agent?
MM: I started writing an historical, then thought short contemporaries would be an “easier” sell. The gods laughed and laughed. I got a couple of rejections on partials, and then took a course at George Brown College on romance taught by Valerie Susan Hayward, who was a Harlequin Temptation editor at the time. She left Harlequin here to go to Silhouette in NY shortly after they started Harlequin Historicals. She phoned me from NY to say, “Are you still working on that historical? ‘Cause they’re desperate here.” (Or words to that effect.) I took a week, worked like a maniac finishing and polishing my historical, then sent it off. Four months later, Tracy Farrell phoned to say they wanted to buy it. A WARRIOR’S HEART, the first book I sold, was the first manuscript I ever finished. I didn’t get an agent until many years later when I decided to try the single title waters. I have to say, I’m still fuzzy on when to call in the agent rather than just picking up the phone and asking questions myself. Poor agent.

MMcG: You’re well known for your medievals. Have you written in other time periods?

MM: Although I most often write medievals, I’ve written books set in the Dark Ages, Restoration England, Victorian England and the Regency.

MMcG: Do you think the market for historical romance is changing? Is so, how?

MM: I live in hope that the days of Regency domination are coming to an end.

MMcG: Tell us a little about HERS TO COMMAND.

MM: This is the story of a very handsome man who’s basically been drifting through life on his looks and charm. He does, of course, have Very Serious Issues beneath that pleasant surface. He meets a woman who, essentially, hires him to command her soldiers. That woman and those circumstances lead to love, and his desire to prove that he’s more than a pretty face. The woman who arouses those feelings has, naturally, some Very Serious Issues of her own, and tries very hard not to fall in love with handsome Henry.
This is the fourth book in my Brothers-in-Arms series; Henry is the brother of the heroine in the first book (BRIDE OF LOCHBARR), and their brother was the hero of the second book, LORD OF DUNKEATHE. Henry’s was supposed to be the third story, but we hit a bit of a snag, and instead I wound up writing about his friend, Merrick, in THE UNWILLING BRIDE. However, I was able to include Henry in that book, and use an incident from that book to good effect when it came to telling Henry’s story, so it all worked out.
MMcG: HERS TO DESIRE is out in August, 2006. What’s it about?
MM: It’s about Henry and Merrick’s friend, Ranulf, and a character affectionately known as “little Lady Bea.” She’s in THE UNWILLING BRIDE, and it’s fairly obvious Ranulf likes her. He’s in HERS TO COMMAND, too, but it isn’t until HERS TO DESIRE that I get them together. I just love Bea —she’s a chatty young woman who was a lot of fun to write. And Ranulf…the poor guy. He’s so in love with her and trying so hard not to be! I had a blast getting them together—although they are in serious jeopardy in the story, too.

MMcG: Cake or pie?
MM: Oooooh, noooo! Can’t I have both? Chocolate cake and cherry pie are my favorites.

MMcG: Okay, you don’t have to choose. What’s your favourite thing about being an author?
MM: I get paid to make things up. I enjoy being self-employed. I never liked group work in school.

MMcG: Your least favourite?
MM: It’s very isolated. I literally don’t get out much.

MMcG: How much research do you do for your novels? Any tips for aspiring historical authors regarding research?
MM: It varies, depending if I’m using a time period I’ve already researched, or using a new one. I think the amount of historical detail a writer uses is part of their voice and style, so there’s no definitive answer to how much research a writer “should” do. I want things to sound realistic, and I always keep an eye out for the “telling detail,” some interesting and unique tidbit that’s indicative of the time and/or place.

MMcG: Where do you get your inspiration? Characters first? Plot? Dreams? Divine intervention?
MM: I start with a character (most often the hero) and a time/place, and build from there. If I start with the hero, I try to imagine the sort of woman that’s going to make him furrow his brow a lot. Sometimes I’ll get a seed of an idea from my research, sometimes from TV. For instance, my next series is about four half brothers because of Bonanza. I always thought it was neat that Hoss, Joe and Adam (have I got the name of the oldest one right?) had the same father but different mothers.

MMcG: Are you a plotter or a seat-of-your-pantser?
MM: I know the beginning, I know the end, but the middle is a free-for-all.

MMcG: Do you write full time?
MM: Writing is my job, but do I spend eight hours a day at it, five days a week? No. How much time I spend working on a book depends on where I am in the process. If it’s the first draft, I take a lot of breaks, because it seems like every sentence is a decision—if I do this, then that can happen. If I do that, then this can happen…and on and on. That gets fatiguing. Once the first draft is done, I work for longer stretches. At the end, I’m literally working morning, noon and night.
I think the hardest thing to get across to somebody who isn’t self-employed is that you’re never really “away” from your work. It’s always there, lurking.

MMcG: That is so true! What are you reading right now?
MM: I just finished DEVIL’S BROOD by Alfred Duggan. It’s about the Plantagenets—what a family! It was research and a little dated, but I enjoyed it. There were some great anecdotes about William Marshall I’d never heard before.

MMcG: What are your favourite books, movies, TV shows?
MM: Books —Jane Eyre, Pride and Prejudice, anything by Lucy Maud Montgomery, and several more. I was a bookworm growing up, as my Grade Two teacher noted on my report card.
Movies: Too many to really name, but off the top of my head: Errol Flynn’s Robin Hood, Galaxy Quest, The Count of Monte Cristo (latest version), Gladiator
TV —The Amazing Race (my daughter and I have twice gone to NY to watch the season finale at Madison Square Garden, which is how we came to be personally “philiminated” by the Amazing Host, Phil Koegan), Survivor, Lost, The Apprentice, Prison Break, 24 (I could listen to Kiefer Sutherland all day!), Corner Gas. One thing I can’t watch is medical shows.

MMcG: Johnny or Brad?
MM: I assume you refer to Johnny Depp and Brad Pitt?
MMcG: Tee hee… You got it!
MM: Johnny. I love Don Juan de Marco (should have that in the list above). Brad’s too pretty for me. And I prefer dark hair to blond. Currently at the top of my hierarchy of hotties is Gerard Butler, followed by Richard Armitage, and Jamie Bamber.

MMcG: Good list! What’s the most annoying question you get asked at cocktail parties or book signings? Have I asked it?

MM: It’s “Are you still writing?” And it’s not annoying so much as rather baffling, as if, once I found out I could actually get paid to write, I’d quit. I appreciate that people really don’t know what to ask a writer, though.

MMcG: Are you still writing? Just kidding. What are you working on now?
MM: The first book of a new four book series for HQN (the one about the half brothers). It’s called MY LORD’S DESIRE and it’s set during the reign of King John. (MY LORD’S DESIRE will be released in February, 2007)

MMcG: And my final burning question: Flowers or chocolate?
MM: Chocolate all the way, baby!

MMcG: Great! Now I know how to bribe you if ever I need to! Thanks so much for chatting with me.