Okay. So those of you who read this blog and not the Drunk Writer Talk blog are not only missing out on the wisdom of Molly and Sinead, but you may have missed my rant on romance heroines. I know. I’m not being fair to them. Just 20 odd years ago they swooned into alpha males arms with barely a whimper. I should be glad they’re strong and make decisions now… But I still wish they made some bad decisions along with the good…

So, how does this relate to Zach Braff and the TIFF? Tonight at the world premiere of THE LAST KISS, Zach articulated exactly what I was trying to say in that rant. (okay, not exactly, but he made a similar point.)

I don’t want to blog any movie-spoilers, but Zach was basically talking about how shocked and thrilled he’d been to find a script for a romantic-comedy-type film where the protagonist makes some really bad choices and neither the main plot nor the subplots have nice tied-up-in-a-pretty-bow endings.

Okay, so those are my words, not Zach’s — his contained spoilers, plus I didn’t commit them to memory — but I think he’d agree with my romance heroine rant.

What I’m wondering now… will this less-than-heroic-at-times protagonist make this movie less commercial? Will audiences protest by staying away? Will portraying flawed characters, showing real human behaviours tank this film?

I hope not. I liked it. I guess we’ll find out soon, it opens on Friday. 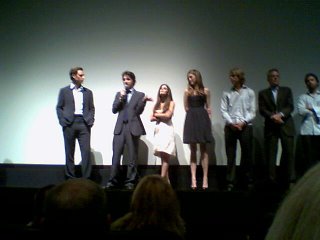 Here’s a crappy resolution phone photo of Zach and the rest of the cast of the film during the Q&A. The short chick beside him is one of the OC gals. (I don’t watch that show, sorry.) By the way, I think I’ve figured out the whole photos/no photos thing now… I’m 90% sure the ex-marine type thugs who threatened me the other day are hired by the distribution companies, not the festival. they’re only at certain screenings. More oddly, they only seem to care about photos taken before the screening, not after. This sucks for movies with no Q&A, but is better than nothing. I’m not going to point out to anyone that this policy makes zero sense… If the cameras are in the theatre during the Q&A, obviously they were there during the film and the photo ops post film are exactly the same as those pre film so what gives? I figure the security dudes must be off the clock once the end credits role. Great. I’m bringing my camera again tomorrow. Missed some great photo ops this weekend including Christian Bale at the premiere of RESCUE DAWN. Oh, well.

Random cool fest moment: Dustin Hoffman at the rescheduled midnight screening of the Borat movie on Friday night. Just there. Sitting in the audience with the rest of us. Shook some hands. Smiled a lot. Dustin Hoffman is a Borat fan! Dude!